The 2020 United States presidential election is the 59th quadrennial presidential election. The election was held on Tuesday, November 3, 2020. The Democratic ticket of former vice president Joe Biden and U.S. senator Kamala Harris defeated the Republican ticket of incumbent president Donald Trump and vice president Mike Pence. President Trump has not conceded and is requesting a recount in some states as well as alleging wholesale voter fraud in the election.

The electoral college meets on 14 December to cast its vote for president and most states use the statewide popular vote to allocate its electors.  Joe Biden is projected to win far more than the 270 electoral votes he needs to become president as he has likely insurmountable leads in Michigan, Nevada, Wisconsin, Pennsylvania and Arizona.

There is a long-shot legal theory advanced by Republicans that argues that if Republican-friendly legislatures in places such as Michigan, Wisconsin, and Pennsylvania ignore the popular vote in their states and appoint their own electors, Trump might have a chance to win.

Federal law allows legislatures to do this if states have “failed to make a choice” by the day the electoral college meets. However, so far there is no evidence of systemic fraud of wrongdoing in any state and Biden’s commanding margins in these places make it clear that the states have in fact made a choice. 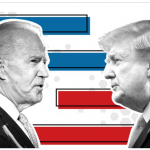